As such, I’ve decided to contribute my own creative writing work into the fray of beings who literally are unable to speak for themeselves.  I was inspired by the documentary, ‘Blackfish’ and the subject is Tilikulm- amongst the most tortured beings held in captivity.

So without further ado, I present to you: 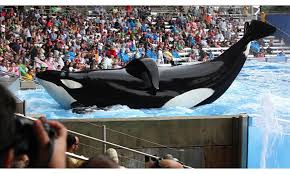 My eyes, the audience, the world – they gaze…

That majestic tail, that erect fin, the black purity of his skin

[THE PAIN OF LIVING CREATURES]

SPLASH! The glittering droplets with each crash, glide and flip through the water – gasp!

But should you peak into his eyes, you catch a glimpse of his demise

[ THE PAIN OF LIVING CREATURES]

the maelstrom of a young man missing his mama

the anguish of abeing the priviledge porpoise

The thunderous clap, the roaring praise

SPLASH! The beloved creature dives back down into the azure mask, away from the crowd