I have in recent years come back to being a fan of comic book culture.  Rather than fawning over and reading Marvel Comics like Spider-man and X-Men, my love of Batman and the Batfamily has grown.  But it was always there, from the moment my parents rented Batman (1989) for us on VHS.  I was a goner. I’ve also come to enjoy, thanks to friends like Josh T., Seth C. , and Optimistic Chad, the Green Lantern, Earth 2, and Fables. The DC Animated Universe is where everything is at though. It is far superior to its rivals. Green Lantern: The Animated Series and Young Justice were strong again this week, and both, interesting enough had to deal what it meant to be a person. In the television series BattleStar Galactica, Cylons were created by man. They evolved, they became shaped like humanity. Were they human? Did they have a soul? That’s a similar question that GL:TAS asked. Aya is artificial intelligence just like the villainous Manhunters. Are they sentient beings? Are they capable of evolving beyond their programming, and if so, does that give them distinct personhood? I think the journey and questions that Razer has throughout this episode is very telling. To me, Razer is the most relatable character, he cares about justice, he is angry, and sometimes that gets him in to trouble. The rage of this good Red Lantern is contrary to the ways of the Green Lantern corps (Willpower) which seeks to control emotions.  I think the Blue & Green Lantern Corps have a problem telling the difference between different types of rage, as Razer pointed out. There is a righteous anger , even inspired by religious & political commitments, that can motivate us to do good.

D C Nation featured two shorts that I was “Meh” about, I just don’t like Batman/Dark Knight in Shanghai as it stands right now, and Princess Amethys, I just can’t get into. That being said, Young Justice was perhaps a big nod to black DC Comics fans. At the very beginning of the episode, Static Shock (well, Virgil) makes an appearance being interviewed by Black Canary.  The Reach have “invaded” Earth, excuse me, introduced themselves to us earthlings, but not before they kidnapped metahumans, or people with a special gene that allows them a unique capacity to survive after a trauma and had experiments done on these people.  For those unaware, Static Shock was a comic character, a black teen with the ability to control electricity. He was first created by the late Dwayne McDuffie,  in the early  1990s, and even had his own cartoon series. The episode continues with a few members of Young Justice being trapped in an alien force-field cage to fight Despero, who wanted to conquer Earth’s best champion. In the files of research that Despero’s robot minion, L-Ron had gathered, most of the champions on Earth were white and male, (except for Icon [the black Republican lawyer version of Superman], another Milestone Comics hero).  So, when Mal Duncan (with only the original Guardian’s helmet and no powers) stands up to Despero, the villains are thrown into confusion. Duncan and the rest of the gang trick L-Ron and his master and defeat them through wit, and with the help of Bumblebee (Karen Beecher). 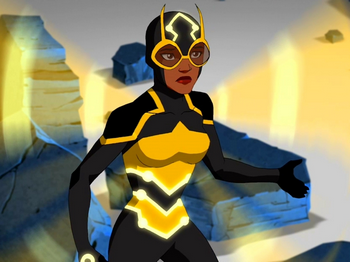 At the conclusion of the episode, another “secret champion” of DC Nation guest stars: Black Lightening, who tried to help Captain Atom break open the force field that trapped our heroes. I found it interesting the parallels between the encounters of the Other/aliens the Reach and the struggles of black heroes to have their personhood recognized. Maybe it was just me but L-Ron making up “-isms” and accusing YJ of cheating reminded an awful lot of people who try to avoid talking about white privilege in the name of reverse racism all the while benefiting from it. I loved how DC Comics is intentional with this stuff. Last year, on JuneTeenth, Mister Terrific’s graphic novel debuted. This week’s episode of Young Justice fell right in line with The Black Comic Book Festival in NYC.

What did you think of this week’s episodes of GL:TAS and YJ?