Thor was one of my favorite comics to read growing up. There was also a really cheesy cartoon featuring Thor that I really loved. I think most of it was because I was also really into mythology, and I am pretty sure that reading Thor comics helped me to pass freshmen English. Nevertheless, Thor has been around since the 60’s and regardless of the radical liberties taken by the comic over and against mythology, Thor continues to be popular, especially now that his movies are doing so well…

Thor is the Norse mythological god of thunder. He interacts both with the Norse pantheon of gods and monsters in Asgard, as well as with mortal here on Midgard (Earth). He is incredibly strong (almost as strong as the Hulk), and along with his mighty hammer Mjolnir, he can pretty much beat down anything in creation. Unfortunately, his brother is the god of trickiness and causes him no end of trouble.

Is this character heroic? Yeah. He has his non-heroic moments, especially when he slips back into the barbaian way, but the amount of times he has put his inheritance and privilage on the line for those who his family considers beneath him makes him heroic enough for a yes. (1 point)

Does this character represent the “powers” or fight against them? Totally represents the powers. Just because he represents a set of powers that is different than American norm, doesn’t mean that his group of gods is any better. In point of fact, they aren’t.  (0 points)

Does this character kill? Yep. He does. Just as any frost giant. I can give him some slack since he grew up with a sword in his hand, but he IS a god, and should be able to seek more creative ways around problems given all of his vaunted power.  (0 points)

Does this character have a spirituality? He is a god, after all… So yeah. He is drowning in it. However, his spirituality is sortof pale considering that his pantheon of gods acts more selfish and petty than many humans. Also, Thor isn’t ever seen dealing with the ramifications of being worshiped. It would be nice to see that explored from a god’s perspective.
(1 point)

Does this character have an interesting (and sustainable) story to inhabit? Yes, but they should be careful. Given the plethora of Norse myths to draw from, there should never be any point at which a writer becomes lazy enough to repeat things. Especially since the real world also gives us plenty to explore from Thor’s perspective. So it is incredibly frustrating that we have seen the battle of Ragnarok (the end times war) no less than 4 times already in Thor comics. Odin has died no less than 3 times. Sif and Jane Foster are jealous of each other how often? It just seems like Thor writers get as lazy as Superman writers when they pen his book. Having said that, it is not the fault of the character or his concept… (1 point)

Does this character have a supporting cast that isn’t just around to make them look good? Verily. Thor has the most robust supporting cast I can think of in comics. An entire pantheon of gods and other characters are involved in Thor’s monthly adventures. He hs family, love interests, authority figures, enemies, and all of them are nearly as well defined as he is. From Odin and Loki, to Sif and Baldur, to Heimdall and Freya, to the warriors three and Jane Foster. Thor has this category hammered down.  (1 point)

Does this character have a T-shirt I can buy in size XL? not many (0 bonus points)

Does this character represent, in broad terms, an outlook on life that I can support? Not really. Thor has a view of the world that I simply can’t have. He is immortal and often speaks down to others, perhaps not in a mean spirited way, but certainly a condescending one. He loves war and battle, revels in showing off his strength, and “wenching” is a thing for him. Not really my style. Fun to read about, not fun to emulate.   (0 Points)

Are this characters powers (or lack thereof) interesting? Thor can manipulate lightning, he can fly, lift cars, create dimensional portals… You might think that the same critique that Superman receives also applies to Thor, but not quite. Thor comes from a place where there are many characters who are as powerful as him, at least in their own way. Not only that, but Thor’s realm is a magical one, in which the rules bend quite easily and good writers should never have any problem finding a way to challenge even Thor’s mighty power. (1 point)

Tune in next time for a discussion of the Phantom Stranger… 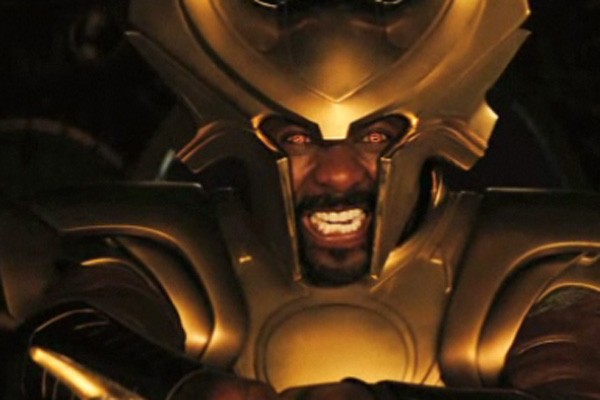 Well, Chad predicted that Thor would not do well a while back. I will say this, I remember when Spider-Man 3 came out, opening Midnight showing, the theater was packed. Yup, but lots of disappointed people. Thor did not draw as big of a crowd (shhhh: Chad and I brought 13 of our closest friends) but I think they were a lot happier. I will say that the story of Thor was played out very well, that Loki and Odin both were believable to perfection. Someone who was with us wanted me to mention how Jane and Thor fell in love so deeply after only two days, but hey it’s love, no one can really control that. The only thing that was confusing was that Chad and I kept seeing the Trinity symbol on Thor’s Hammer. Several databases online it has some relationship with Nordic religions, maybe even Odin, so it’s not purely Celtic as Chad tried to suggest.

Speaking of purity, the cast was multicultural, as those white-supremacists decried, but it was not boorishly so, meaning these just were not tokens. One S.H.I.E.L.D. agent commented, upon seeing Thor’s friends, “We have Jackie Chan, Xena, and Robin Hood.” Overall, I would rate the movie pretty high on the list of comic book movies (that doesn’t take much), With Batman Begins as the pinnacle, The Dark Knight as #2, and Iron Man as the 3rd ranked, I would say Thor could possibly land in the top 7; how is this determined? I would say 1st, faithfulness to the original storyline in the comic, #2, believable acting performances, and #3, decent dialogue with as few cliches as possible but some memorable quotes that suggest an overarching theme

For anyone who is a fan of NBC’s The Office, if you remember Idris Elba, aka Charles Miner (who became the interim manager of the Scranton Branch in season 6), he has a new gig as Heimdall, the Norse God and sentry of Asgard.

Well, apparently, a group of white supremacists are calling for a boycott of this “revisionist” film, citing Marvel comics for being anti-conservative politics and “social engineering.”  Way to go, Council of Conservative Citizens!