Words cannot express my feelings for the Chris Brown/Rihanna incident last year, and maybe I will be able to express them at a later date (let’s just say simply put, Brown was given cheap grace by the black community–I had one too facebook responses to my anti-domestic violence statuses during that time saying we should forgive first. Um, whatever happened to repentance).

Katie Grimes first wrote A Double Standard for women and violence in the media; my comments in that post, when comparing Rihanna to the likes of Martina McBride, I find differences according to race and nationality. The American flag does not appear at all in “Man Down” yet featured in McBride’s Independence Day”– the theme song for Sean Hannity’s radio show.

Oh, and that vengeance thing, while ambiguously considered by Rihanna, is definitely glorified in McBride’s hit.

Secondly, Tim McGee wrote with great detail how the culture of rape takes away the subjectivity of women, i.e., keeps in into a gridlock of social death in his The Political Contours of Rihanna’s “Man Down”: Pulling the Trigger on Rape Culture.

UPDATE: Tim has added a second reflection, The Theological Contours of Rihanna’s “Man Down”: Pulling the trigger on rape culture

I hope you all will take a look at both posts. Highly recommended 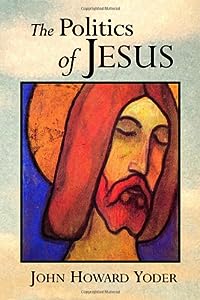 Cover of The Politics of Jesus

Thanks to Carson Clark for the heads up.

Check out this video of John Piper discussing the issue of women’s submission and the issue of domestic violence.

When I first saw this video, my face was shocked with horror, but not surprised given the fatalist g*d that Piper preaches about.

“First, from my perspective, subordination is terrible, like being a slave but with better clothes. Not all of those who say they are complementarians subordinate their wives, probably very few. I never said that they did, so we can leave that to one side. I have already said that many women are not subordinated in spite of those that teach that they should be.

I am simply saying that a theology which allows women to preach, and teaches that women should be subordinated in the home is excruciating for those women who don’t preach. There is one woman whose husband allows her to preach, but the next women doesn’t get to leave the house without permission. These things happen, and John Piper has been quite open about the woman who spent years not being able to go from one room in the house to another without permission.”

Please take note of the last line: Piper has openly discussed women needing permission to go from room to room in houses. In the video, Piper says that women should endure the beating for a season (how long is this, in the first instance? A year? a few months? a decade?) and in the second, he insists that women should go to churches to discipline domestic abusers (what is to guarantee the church will take action? what is to stop the congregation from covering up the abuse?). The answers to all these questions I put forth to Piper’s answers (cuz, you know, his people like to hear answers to their questions, rather than asking questions–another time, another place) are not going to be simple or black and white, but let me deal with the elephant in the room: the notion of subordination.

In New Testament terms, submission is to be mutual, between husband and wife, for the husband takes the example of Christ the sacrificial lamb in self-giving and his wife responds in kind. This is how I understand Ephesians 5, since it does begin with a discussion of Christ’s sacrifice, and it clearly says, in Ephesian 5:21, TO SUBMIT TO ONE ANOTHER, but in some particular versions of the bible, verse 21 gets separated from the “household codes.” Isn’t that interesting? Agenda in translation anyone? So the notion of subordination is about ordering our lives under the ordering of God, more of a sub-ORD-ination (I am borrowing from John Howard Yoder’s The Politics of Jesus). As such, this order of God calls for Christians to sub-ORDER their freedom to the civil government that God has allowed. This is what Romans 12-13 is about, and as such, the dagger Paul discusses in these chapters is about JUDICIAL authority, and not executive. This is key to understanding the passage. John Piper’s solution is not about mutual sub-Ordination, but about the unbalanced submission of women meeting every demand of men, but he excluded sub-ordering to the judicial authorities in these instances. His solution is unbiblical on these Pauline grounds.

Sub-Ordering our lives to the Way of the Cross & Resurrection should mean a concrete intolerance of all violence, this includes domestic violence. So some Christian advice for anyone going through a domestic violence situation: Please get out, as soon as you can, and seek the proper legal authorities.  It is not God’s will for you to endure violence against your body, for your body is a sacred temple, the Holy of Holies of the God YHWH.

Yesterday, Eka Tupamahu [post editted] as I somewhat winded up in a heated discussion about Jeremiah 20:7.

In this post at the blog, The Curious Jew: “On God, Rape & Ravishment: Jeremiah & John Donne”, the writer Channa suggests,

“The meaning of this extraordinary confession becomes clear when we consider what commentators have failed to notice, namely, the specific meaning of the individual words. The striking feature of the verse is the use of two verbs patah and hazak. The first term is used in the Bible and in the special sense of wrongfully inducing a woman to consent to prenuptial intercourse (Exod. 22:16 [H. 22:15]; cf. Hos. 2:14 [H. 2:16]; Job 31:9). The second term denotes the violent forcing of a woman to submit to extranuptial intercourse, which is thus performed against her will (Deut 22:25; cf. Judg. 19:25, II Sam. 13:11). The first denotes seduction or enticement; the second, rape. Seduction is distinguished from rape in that it does not involve violence. The woman seduced has consented, although her consent may have been gained by allurements. The words used by Jeremiah to describe the impact of God upon his life are identical with the terms for seduction and rape in the legal terminology of the Bible.”

The context of the passage is a theological rant by Jerry the prophet himself (A LAMENT). He was throwing a hissy fit. He is not describing a literal, historical event. He was expressing his outrage using crude language. So no, God did not literally rape Jeremiah. Jeremiah feels as if he had been sexually violated, as it seemed that God had not kept his promises in keeping Jeremiah safe from his enemies. Eka and I were taken back by this passage and because we try to be fair, it does offend our free will theological biases, but we accept this passage as truth. My explanation would be this. In the priestly tradition, there were regulations set up by law for who was to be a priest. There is a freedom in knowing your role is already determined. In fact, too much freedom, under the umbrella for the freedom to worship, became the freedom for apostasy as well. (we still see this today). In the prophetic tradition, however, YHWH actively works to limit the prophets’ options; they either join YHWH or they die. We see this especially with Ezekiel and Jeremiah. God’s predestination, therefore is not for a soteriology based on a glorious pie-in-the-sky, but a mission for service in the here and now. In chapter 1 of Jeremiah, God chose Jerry from Jerry’s mother’s womb (1:5). The idea that God intervenes in the world still offends some today (process theists, you know who you are). But to say that God really takes our libertarian freedom will within the prophetic tradition will raise some eyebrows.

According to Dr. Claude Mariottini, divine election to prophesy may mean a sense of security in God. As he explains in this post,

“Jeremiah began his prophetic ministry with the assurance of God’s promises of protection, but because of rejection and opposition, Jeremiah felt he was deceived by YHWH. The English word “deceive” carries the same meaning as the Hebrew word for rape used in Exodus 22:15. Thus, Jeremiah, feeling a deep sense of betrayal because of the people’s rejection of his ministry, complained that God had deceived him since his message was rejected and his ministry seemed so fruitless.”

Dr. Mariottini is correct; with the call to prophetic ministry, comes loneliness and rejection. Prophets, though chosen of God, are far from perfect. Mariottini and Channa are not alone. In Walter Bruggemann’s Theology of The Book of Jeremiah, he identifies the rape language as well: see here. Patrick Miller, in The New Interpreters’ Bible, sees parallels between Jeremiah’s lament and the language used in Proverbs 14:10 and the story of Delilah and Samson (Judges 14:15).

To the Christian mind, at least, we know that YHWH (Creator & Father/Mother) is incorporeal, and so it is not possible for God to reproduce, unless your name is Mary, Joseph’s fiance. All kidding aside, Jeremiah is expressing his disappointment metaphorically and felt that God had violated his very body with sexual violence. For some readers, the verse needs to be censored. These readers may be the same churchly people that want pastors and laypersons to be prevented from speaking on sexuality, let alone sexual abuse, violence and rape to congregations. When I was in undergrad my freshman year, I used to play video games with a group of young Christian men. In the midst of battling in our wars in College Football 2001 and Madden Football 2001, if one opponent was victorious over another, he would say, “I totally raped you.” It was quite offensive and desensitizing. I got used to it, as the years went by, and that same taunt, the trash talk using the lingo of sexual violence became very prominent in games of Halo 2.

My question is, why is it okay to talk about rape in the context of gaming, but not in churches? Especially when our canon has a character in it who accuses YHWH of sexual assault. When I think of what I have learned about the Prison-Industrial complex the past few years, the atmosphere of male-on-male rape (warden and officer approved sometimes) as an act of bodily terror must be exposed to be on par with the experience of women on unsafe college campuses. Imagine what would happen if pastors and scholars used Jeremiah 20:7 as an impetus to join movements such as the Stop Prisoner Rape campaign.