Finally, a Bible that suits my consumer needs. I’m a pacifist, and now I am excited to announce the introduction of the UN Peacemakers’ Study Bible, for those who believe in international peace movements and humanitarianism. Need a Bible full of quotes from Christian pacifists? This study bible has them, all the way from Tertullian to Menno Simos to John Howard Yoder. This study bible includes anti-war liturgies and and commentaries reflecting on the godly work that the United Nations does. The UN Peacemakers’ Study Bible contains special essays comparing American icons Franklin Delano Roosevelt and Woodrow Wilson to King David and King Solomon of Israel. Now you can have a Bible that reveals the true meaning of Scripture: to spread democracy and free market capitalism around the world!

Thank you Crossway, thank you for a providing a Bible that speaks to me, that’s all about my experience. No doubt the UN Peacekeepers’ Study Bible will out sell The Founders’ Bible, Patriot’s Bible, and the KJV Military Bible!

A while ago, I defined Christian dominionism as ” about Christians being masters and non-Christians being slaves (in economic and political terms)” in my post: Ephesians 6 and Dominionists’ Emotional Appeals to defending slavery. Such a domination system has to have a nice smiling face that speaks softly of seemingly nice ideas in order to become part of the mainstream.

One such face is David Barton who continues to profit from selling lies. What Dominionism means is a Civic Religion of pseudo-Protestantism, a Protestantism without protest or one of its key teachings, Solo Christus/Christi (that Christian salvation is experienced through Christ alone). A professor of Church History from a conservative Southern Baptist institution has a description of both Barton’s faulty scholarship as well as dominionism in general.

“Consequently, in Barton’s scheme, politics replaces discipleship, and the nation, not the church, becomes the focus of our efforts towards righteousness. Further, the church becomes a servant to the state, extolling America’s blessed history, proclaiming its righteous mission, and praising its glorious leaders. And thus, by taking Christ’s place in the church, the nation becomes an idol. And that is something my evangelical convictions cannot countenance.”

And there you have it, the definition of dominionism.

The following is a very short example of the genealogical method at work. To do a genealogy when it comes to the study of the history of anything, first, you take the texts that the majority/powerful talk about (the canon). Next, you take the texts of those of the minority/those with less power. Lastly, you read them together. An over-simplistic and brief overview of hard work that people do nowadays. 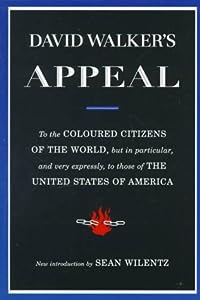 David Walker’s APPEAL has been an overlooked document when it comes to doing history of the world. In fact, because of our racist gazes, it’s perpetually stuck in Black History Land, speaking to only the particular concerns of African Americans. Reading David Walker’s APPEAL as a theological text would suffice, and so would it even biblical interpretation. With the final and third edition printed in 1830, Walker left his mark on the world. Yes, it is a Christian anti-slavery document. More importantly, Walker offers us insight into what Jefferson’s own contemporaries believed about Jefferson, who David Barton and Glenn Beck,amateur historians and professional lying con con men claim to be a bible believing evangelical Christian. Walker’s analysis is brilliant and underrated, a work of Blerd Power to be sure. David Walker starts with the histories of ancient Greece, how the Helots were mistreated by the Spartans, and does a comparative study, showing that the pagans treated their slaves better than the Christians in colonial America.

“Yet notwithstanding these and other discouraging circumstances among the Romans, their slaves were often their rarest artists. They excelled too, in science, insomuch as to be usually employed as tutors to their master’s children; Epicetus, Terence, and Phaedrus, were slave–but they were of the race OF WHITES. It is not their condition then, but their nature, which has produced the distinction.”

And there you have it; Thomas Jefferson promoting White Supremacy. In contrast, Jefferson says that blacks have been cursed with their black skin (how unfortunate!). It’s just not that Jefferson owned slaves, slept/raped his slave women and had kids by them, he was practicing what he believed, that black people were not human.

David Walker again and again cites Thomas Jefferson, and especially his Notes On The State of Virginia (linked here):

“I advance it therefore as a suspicion only, that the blacks, whether originally a distinct race, or made distinct by time and circumstances, are INFERIOR to the whites in the endowments both of body and mind.”

Blacks were animals, they were not human in Jefferson’s eyes. No where in Jefferson’s statements did he mention anything about God being creator of all of humanity, that we are all made in the image of God. Why? Because quite frankly, Jefferson was a non-Christian. David Walker groups Thomas Jefferson with the PAGAN philosophers of the past. In the second half of Walker’s APPEAL, Walker argues against “fellow Christians” like Bartholomew De La Casas and Henry Clay “The Great Compromiser” but Jefferson is not in their number.

To conclude his essay, Walker ends with a hymn by one of the Wesley brothers, and interestingly enough, excerpts from the Book of Common Prayer.

“Shall I for fear of feeble man, The Spirit’s course in me restrain? Or, undismay’d in deed and word, Be a true witness of my LORD.”