This past Monday, a couple of friends and I had the privilege of seeing the esteemed and much and anticipated ‘NOAH’! 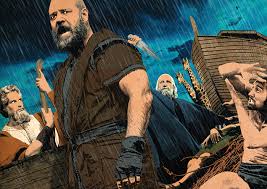 Honestly, I was not quite sure what to think of this film going in. In the evangelical community it seems as though the three big films to look for at the moment are Noah, Son of God, and God’s Not Dead. Son Of God seems to simply be yet another dry rendition of what ought to be called “the lie and times of white Jesus”; God’s Not Dead (as evident in the gag-worthy trailer) simply affirms the mistaken narrative of the innocent young, white, ,cheery-eyed Christian pitted against the angry, atheist  professor. So, striking these two off of my list, the only one I was even remotely interested in seeing was Noah.

With any movie even loosely based on the bible, there is going to be some degree of artistic liberty taken. One of the biggest places this is evident(almost distractingly so) is in the ‘nephilim’ passages:

6 When man began to multiply on the face of the land and daughters were born to them, 2 the sons of God saw that the daughters of man were attractive. And they took as their wives any they chose. 3 Then the Lord said, “My Spirit shall not abide in man forever, for he is flesh: his days shall be 120 years.” 4 The Nephilim were on the earth in those days, and also afterward, when the sons of God came in to the daughters of man and they bore children to them. These were the mighty men who were of old, the men of renown.

And what does this translate to:

That’s right, the image you see above is the movie’s depiction of the elusive ‘nephilim’ or, as they’re referred to in the film, the watchers. They’re essentially these rock golems who are described in the film as being angels who were sent from heaven to protect and guide humanity , but the watchers you see above are the result of those angels that have gotten too entangled with the things of the earth(sin) and quite literally the lava and solid portion of creation and so God encased their more beautiful former forms in rock as punishment. It’s an interesting concept and in the end I guess I appreciate the risk with such an artistic rendering, but it was also a bit distracting, especially if one didn’t have a passing familiarity with where the idea even came from..

The rest of my ideas about this film are essentially spot on with an article that fellow-blogger, blerd, and liberation theologian Rod had shared with me. It was an article from Greenleft Weekly, entitled  “Noah story not for conservatives“. In it, the author,Karl Hand, makes several great points that run perfectly in line with the vibes and ideas that I got from the film,

“Conservative scholars like to breeze over these unedifying details, and give a Disneyfied, PG version of Noah. But Aronofsky’s warts-and-all reading of Noah, with its “green agenda”, gets something of both the Noah myth, and the ancient Semitic mythical world-view, that the traditional, Christianized re-telling miss”

– This is a powerful, powerful statement that I agree with whole-heartedly. On the car-ride back with my friends, I remember turning to them and asking “It was subtle, but I got a bit of an ecological/environmental apocalyptic vibe from that film” and they nodded hesitantly ( so as to appease the resident rabid environmentalist- myself). Or WAS it so subtle? As Hand alludes to in his review of the film, ( and in the quote above) much of our own perceptions of ‘Noah’ has to do with the way American Christian culture has presented the story. The way it’s been presented , traditionally, was so as to emphasize and harmonize the strict , self-righteous moral code within the evangelical Church and , thereby externalize/dismiss any other part of the story that are “irrelevant” to reinforcing this moral code. This story is often taught in tandem with the Sodom of Gomorrah – need I say more?

“Creationist Ken Ham’s recent public debate with Bill Nye (“the science guy”) at the Creation Museum included a lengthy and totally perplexing section on the science of building arks, and the feasibility of one being built 4000 years ago by a 600-year-old man named Noah.

This debate fizzled about the time Nye asked Ham if there was a kangaroo on the ark, and why haven’t we found any remains of it on its journey to Australia.

As bad, if not worse, than Ham’s appalling science was his appalling anthropology and total insensitivity to the function of a good myth. Any attempt to take mythology as a record of literal events will result in this kind of absurdity.”

There was a scene in the film where Noah was reading the beginnings of Genesis to his family on the Ark as the torrential downpour had just began. As he was reading, there’s an incredible illustration of the world being formed from the beginning – however, the way it’s illustrated is awfully similar to the proto-planetary hypothesis in its display of the big bang and the formation of Earth from resultant rock bits and collisions from asteroids and the later appearance of the ocean and tectonic processes. This scene was so immensely potent because it essentially resolved (IMO) the idea that Genesis and the scientific account can coexist and achieve syncretism – but on a deeper level, for me at least, it revealed the divinity intrinsic in even the most exacting scientific account of the world’s formation. Scientific laws, theorems and properties often have very poetic rings to them – “Energy is neither created nor destroyed” , we call this science- but that’s ART!

“The power of mythology is its ability to describe the meaning of human life and resolve deep dialectical tensions (such as, in this case, the tensions between chaos and order, justice and kindness, ecological priorities and the value of human life).”

Excellent quote. I could not have said this better myself, honestly. The tension between chaos and order is certainly well-illustrated in this film and further fleshed out in cinematic finesse. I especially felt this film expertly illustrated the ecological priorities and the value of human life – the fact that the account of Noah’s story describes God as destroying a perverse humanity yet preserving the animals- the very foundations and cornerstones of our global ecology, is far more radical than most mainline evangelicals care to acknowledge. The Noah account displays the result of human wickedness- with the state our natural, physical planet being an indicator or reflection of our collective sin.

Adam and Eve’s first child Cain kills his brother Abel in a fit of jealousy, and this seems to damage the cosmic order of things as the ground cries out to God for justice (4:10). Aronofsky represents this in Noah’s dreams. On two occasions, he steps onto the earth, looks at the sole of his shoe and sees in horror that it has blood on it, which is oozing from the ground.

This is a representation of how violence and injustice affects the cosmic order — the ground itself is bleeding. Violence is not a purely individual phenomenon, it is systemic, it makes the order of things sick.

In one of the most brilliant scenes in the movie, the silhouette of this first primeval murder by Cain morphs into killings and murders from all ages in human history. It features various military clothing styles from different eras and also period weaponry.”

This quote is essentially the main punch for me. This quote sums up why, though trippy at parts, I ended up enjoying the film and its message overall. The notion that our very planet bears witness to our wickedness is certainly an idea that Christians today must understand and is not hard to believe (i.e. to what extent is the  abrupt shifting of our climate, rapid deforestation, loss of biodiversity, etc. telling of our problematic relationship to one another as a collective humanity- whether it be greed, racism, xenophobia, etc.?) The most brilliant scene in this film, that actually enhanced my understanding of the passage, was , in fact, what Hard described, as “the silhouette of this first primeval murder by Cain morphs into killings and murders from all ages in human history. It features various military clothing styles from different eras and also period weaponry” – all this so as to say we as a humanity, like Cain, are quite guilty for killing our brothers and sisters.

All these great things having been said – I did NOT appreciate the pale British-accented casting; let us remember that people who were essentially desert nomads would not have looked nor talked as European as they were depicted- but of course this is of no surprise to anyone with even a passing familiarity with Hollywood’s race problem. And with a film geared towards white evangelicals (along with Son of God and God’s not Dead), it can really be of no surprise that this is was the result.

If I had to rate this film, anything, I’d give it  a 7/10 – it was a solid film and one I think anyone who even thinks they might enjoy, in fact, would. While this film was probably more for the Emma Watson fanboys if anyone (lolz) and often displayed trippy/distracting cinematography and character traits ( Methuselah is a stoner- for lack of better words) along with (chronic whitening of biblical characters, the ideas this film confronts its mostly evangelical audience with are sure to reinvigorate a conversation that must take place within the Church today regarding the connection between environmental, social, economic ( and ultimately, spiritual) problems.

P.S. By the way, I guess I shouldn’t be surprised that this film was so trippy – the director, Darren Aronofsky, also directed perhaps the most mind-numbing portryal of drug addicts in film history: Requiem for a Dream: