Defending Constantine For the Wrong Reasons

A short time ago, there were a group of theobloggers who out-right rejected John Milbank’s mourning of the loss of Christian empire.  Of course there were a few people to come to his defense, for  the sake of being contrarian, like in this instance of Scott McKnight documenting Peter Leithart’s “re-assessment” of Constantine.  I know that in the academy, it’s popular to blame Emperor Constantine for this huge fall for Christianity, but I do not buy into that meta-narrative.  The impact Constatine had on Christians in his day  would be equivalent to a bold politician abolishing the death penalty, with death-row inmates giving her all of their gratitude.  We should not blind ourselves, however, to historical facts, and the deep transformation that came with Constantine’s conversion. Whatever we think of Christians and power, I think it would be suffice to say that the Gospel is the primary source of information for how a Christian should live. Indeed, this is not the case for Milbank in his latest article, criticizing John Howard Yoder for not taking his cues from Gandolf, a fictional character from the Lord of the Rings. As I bring out my inner-fundamentalist, I want to scream Prima Scriptura! Milbank’s position does not come as a surprise development. By now, he has become rather consistent in his advocacy of a Christendom foreign to the virtues of Jesus the Messiah and Paul, his slave and apostle.

I really could care less about the conclusions that Milbank conjures at this point; his error lies in his methodology. Call me a traditional Protestant all you want or fundamentalist, but as a faithful Christian, I do not think the first resource Christians need to be looking to, is a fictional book to establish a reactionary realpolitik world-wide. As Roland Boer contended months ago, using a work of fiction for a political theology is just dumb.  Theologically, political meekness should be seen as God’s gift to Christ followers in a world where people are educated from their early years to make as many grabs for power as possible, where Ayn Randian ethics of “selfishness as a virtue” are lifted up over self-giving and mutuality.

Okay, I’ll get off my high horse now.

Warning :this is not a Partisan attack  but An Adventure in “Kuperian” Christianity

Last week I posted on Abraham Kuyper and Woodrow Wilson.  I think they are the best examples I can give of persons who adhered to a brand of Reformed theology and global statism that is endemic of evangelical political practice.

There were a number of conservatives upset that Speaker of the House Nancy Pelosi would invoke the name of Jesus (referring specifically) to John 1:1,18 while advancing her policy preferences.

You can see the video here!

Isn’t that exactly what many conservatives do as well?  Of course. A lot of Christians try to use Christ’s name in order to prove that God is on this side or that side. Jesus is used as a political puppet for our agendas.  But I refuse to refer to this a Constantinian Christianity, as many scholars have; rather, I would prefer KUYPERIAN Christianity, to avoid a polemic that has played itself out and has had more of historical implications here in the USA.

In the words of Baptist theologian Herschel Hobbs in the revised versions of E.Y. Mullin’s Axioms of Religion:

“Christ cannot be claimed as the special patron of any particular reform movement.”

[Content Note: the author cites the late John Howard Yoder who victimized a number of his students who were women, – signed the author 12/26/17]

Last week, in my desperate need to read more and more of John Howard Yoder’s work in my precious free time, I ordered his For The Nations: Essays Public & Evangelical. 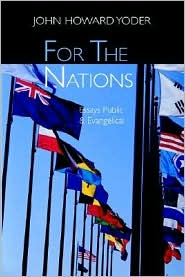 The book actually comes at the perfect time.  Recently, my commitment to Christian nonviolence has been called into question by my peers.  I recently received an email from a friend with a link to the Institute for Religious Democracy’s case against Yoder and Hauerwas’ s call for the Church to Christian pacifism: Playing With Pacifism. In effect, the author questioned the mainline church’s now oh-so-trendy commitment to pacifism in an age of terror.

After considerable thought, here is my response:

The problem with organizations like the Institute for Religious Democracy really begins with the name of the aforementioned organization. The notion that there can be a “Religious Democracy” comes from a group of people who would prefer to be relevant to society rather than faithful to the gospel. Christians, however, live under a monarchy, the kingship of Christ and not any democracy. Christian pacifists like Yoder and Hauerwas as mentioned in the article are popular in seminary circles; but their message is not heeded because what they are calling for is faithfulness to Christ first and foremost, and that is not happening in the Church. Hauerwas is despised at Brite, believe it or not. It is a liberal idea that Christians should conform their ideas to the world, take the gay marriage and abortion issue. Liberal Christians want churches to accept gay ordination and marriage, so they are more likely to mix Christian ideas with the latest science or gay rights political slogan. In the same way, conservatives mix Christianity with American ideas of patriotism and masculinity to promote a crusader war mentality that is anything but the original just war theory of Augustine. Augustine was originally deemed heretic because of his doctrines of Just War. Christian pacifism was once the original orthodox Christian stance. Now, the orthodox claim that Just war is the orthodox stance, when in reality, it never has been and never will be. For the meek shall inherit the earth.

It must have been an act of God for me to receive For The Nations in the mail today.