“Scripture is authoritative and inerrant in the sense that it is a witness to the infinite and inerrant nature of God and to the finite and fallible nature of human beings.  Scripture witness to God who is truth. […] We who interpret scripture are fallible.  Many have used biblical texts to rationalize their own errant desires and lust for power, sometimes fully convinced they were following God.  Yet, others have more rightly interpreted its authoritative guidance for authentic participation in divine goodness.  Biblical literature is as much about human imperfection, sin, and preferred cultural practices as it is about divine power, goodness, righteousness, love, relationships, and justice.”- Karen Baker-Fletcher, Dancing With God: The Trinity from a Womanist Perspective, page 26.

“The doctrine of biblical infallibility reinforced and was reinforced by the need for social legitimization of slavery. Thus, racial slavery was accepted as the necessary fulfillment of the curse of Ham. This had the effect of placing the truthfulness of God’s self-revelation on the same level as Black slavery and White supremacy. The institutional framework that required Black men, women, and children to be treated as chattel, as possessions rather than human beings, was understood to be consistent with the spirit, genius, and precepts of the Christian faith.”- Katie Geneva Cannon, Katie’s Canon: Womanism and the Soul of the Black Community, page 41

I think that without a reference to Christ as our inerrant Rabbi/Priest/Teacher, definitions of biblical inerrancy/infallibility fall flat. Without Christocentrism, inerrancy becomes a cover for Christians who want to view their interpretation of the Bible as perfect. I argued this in the 2011 post: Katie’s Canonnization: Problems With The Chicago Statement. That was my position then as it is now. I was more apt to referring to Scripture as fully trustworthy, but I am open to using the language of inerrancy with the appropriate qualification: Christology.

THE BIBLE AND LIBERATION IN AND THROUGH WORSHIP

When I was in undergrad, one of the first courses I took in religious studies was Introduction to the Bible 101. It was taught by a Hebrew Bible scholar who also identified as a second-wave feminist. Throughout the semester, we learned how to examine the Old Testament using the scientific method. While many of my white, more conservative evangelical classmates left the class in unspoken rage because of the questions the professor raised, I began to learn how to read the Bible critically, and even began to question the professors approach at times.

Honestly, in our conversations looking back, I was ill-equipped to interpret Scripture because I did not even know what hermeneutics meant or the differences between genres were. These memories of growth are not what I want to talk about however. I really want to point out a rather perplexing episode that happened in this class. It was around the holiday season when the religious studies faculty made a request. That instead of returning our Oxford Study Bibles (NRSV) to the bookstore for $2 or whatever, to donate them to an organization that was providing Bibles to churches in China. Even back then I had a lot of questions about this project. Why would a faculty so critical of a text turn around and want to send ENGLISH translations of Scripture to a foreign land? Just never made sense to me until………….

I read Stanley Hauerwas’ Unleashing the Scripture: Freeing the Bible from Captivity to America. The question that I asked of myself nearly now almost a decade ago had found its answer. Hauerwas begins this controversial work with this truth bomb:

“No task is more important than for the Church to take the Bible out of the hands of individual Christians in North America. […] North American Christians are trained to believe that they are capable of reading the Bible without spiritual and moral transformation. They read the Bible not as Christians, not as a people set apart, but as democratic citizens who think their ‘common sense’ is sufficient for ‘understanding’ the Scripture. They feel no need to stand under the authority of a truthful community to be told how to read. Instead, they assume they have all the ‘religious experience’ necessary to know what the Bible is about.”

Now, Hauerwas goes on to denounce this approach as a product of liberal democracy and egalitarian values. Yet, that would be a tremendously sloppy description of the United States of America and its perpetuation of racial hierarchies. Even in Hauerwas’ own work, he recognizes that a lot of white Americans have not confronted the reality that they live in a country built on settler colonialism, genocide, and slavery. It is this denial of the truth that keeps white North American Christians from being able to do the real work of Christian peacemaking.  The triplet colonial projects of U.S. American Bible Societies, Biblical studies, and the Bible translation industry are the reigning institutions that have petrified problematic, racist interpretations of scripture in USian Christianity.

A couple of examples include recent blog posts that recycle and pay  homage to the white supremacist doctrine of the Curse of Ham.  Rather than seek to liberate and completely annihilate this oppressive reading of Scripture, emergent Christians and liberals would rather seek to somehow redeem this understanding of the Bible.  These otherwise “enlightened” folks would prefer to save something that is already familiar to them rather than encounter the Stranger at the Margins, the actual people harmed by the traditional reading of these passages.  To keep with the example of the Curse of Ham, this interpretation is seen as normative, so much so it is allowed to be taught in public schools.  This perverse racialized reading of Genesis  that evangelical leaders like John MacArthur promote is NOT worth serving, especially since I have expounded many times how the Curse of Ham (and this weird expansion of it “the Curse of Bable”) is  a product of white slave masters and racist pseudo-scientific catalogues.

The history of Bible Societies has been just as problematic. As my brother pointed out, Bible Societies purpose lied from the time of colonialism ’til now, to make Christianity a monolinguistic, monocultural spirituality that submitted to the British and American empires.  Our doctrines of Scriptures even inerrancy are often the very things we hide our agendas behind.  Now it would be for me to say, well, let’s just abolish all three institutions and get it over with. But really, what should these practices be replaced with. So, I offer the following few practices that churches can start to subvert the Powers of Bible Societies, Translations, and Biblical studies.

1. In worship settings, at academic and church planter conferences, practice a preferential option for the margins.  Invite the homeless and the widows and orphans, and allow them to sit anywhere they want, even if it is at the very front.  Read Scriptures with and do small group studies at prisons, at-risk youth’s homes, and shelters for domestic violence.  I know I had the privilege of working at a Vacation Bible School at one of those shelters, and it makes a difference in de-centering our experiences while simultaneously being present where Christ is, among the least of these.  Some of the best commentaries on the Bible come from persons who have been held in chains.  Reverend Dr. Martin Luther King Jr. and Dietrich Bonhoeffer are just two examples.  It’s a shame that Bonhoeffer’s Letters From Prison is just merely used to provide one quote about God being a Suffering God, and not much else.  I think there lies a biblical  Hermeneutic of Gentile Responsibility that also need s to be examined (and I plan on blogging on that too).

2. Make an attempt to teach every congregant the original languages of Scripture and the Early Church.  When I was a children’s minister, I worked to introduce the kids to some of the Greek alphabet.  That was before I moved on to purchasing and teaching from published, Book-store approved curriculums.  Maybe I did fail by a certain view of success, but just the trying is all that mattered.   W.E.B. DuBois advocated educating black Americans suffering during Jim Crow by teaching them all the classics, and Greek, Latin, and other languages.  Susannah Wesley raised and taught her children like John and Charles to read and interpret in these languages.  Bringing back this mode of education is crucial to de-centering the notion that English as God’s preferred language.

3. Lastly, boycott Christian bookstores, especially Mardel. No, I’m serious.  Churches need to stop relying on their neighborhood Lifeways and Cokesbury’s (are they still even around?) and look to their congregants, where there are people who’ve graduated seminary, teachers, and former professors who are more than able to provide a lifetime of knowledge. Chad even proposed at one time to make his own Bible translation after failing in his search where he compared all English translations. Christian education is about discipleship, spiritual formation in a local congregation. The Bible as a text, needs to be mediated by the Holy Spirit, our encounters with the poor, and an interpretative community that confesses the Lordship of Christ Jesus.

This is my contribution to the Living Liberation blogging event with MennoNerds and The Wild Goose Festival. The Wild Goose Festival is a gathering at the intersection of justice, spirituality, music and the arts. Happening June 26-29 outside of Asheville in Hot Springs, NC. You can get more information and tickets here: wildgoosefestival.org 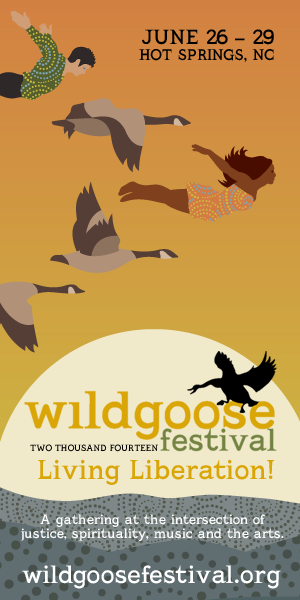 So unfortunately, I was unable to make it to Baltimore for the American Academy of Religion meeting. Apparently two other academic organizations, something called SBL and theEvangelical Theological Society also meet at the same time. Apparently there was a debate between a few evangelical leaders and Pete Enns, and I thought Michael Bird’s questions were right on the money, the same inquiries I have been asking:

You can find the rest of Bird’s thoughts here.

As for my post on inerrancy as white evangelical folklore from so long ago, I don’t really think I can say it better than Jim West.