This is a guest post by Charles Hackney as part of the ongoing conversation here at Political Jesus on Once Upon a Time and Grimm. Just for the record, Chuck agrees with me 100% that #OUAT is the better show (and no that is not just because he’s married to me). 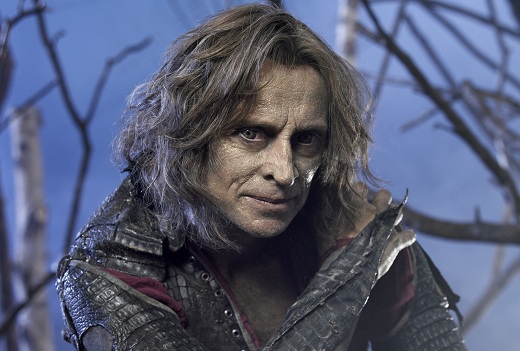 Amanda Mac’s post about Once Upon a Time and the theology of evil got me thinking. So I’ve put on my psychology cap (would that make me a mad hatter?) to take a look at the two primary villains of the series: Rumpelstiltskin and Queen Regina.

Rumpelstiltskin serves as a Faustian devil in the show. A being of seemingly-unlimited power, people make deals with Rumpel, but the deals invariably end up disadvantaging the “customer.” In the second episode of the first season, “The Thing You Love Most,” Rumpel is revealed to be the one who provided the curse that Regina used to bring the characters into Storybrooke, but he requires her to sacrifice the only person she truly loves, and includes the provisos that he will be powerful in their new world, and that she will be bound to obey him (as long as he asks “please”). In the fourth episode, “The Price of Gold,” Rumpel kills Cinderella’s fairy godmother and makes a deal with Cinderella: her perfect evening at the ball in exchange for “something precious,” which turns out to be her firstborn. “All magic,” he says, “comes with a price.” In Storybrooke, Rumpel becomes the wealthy Mr. Gold, and continues to be the one who can make things happen… for a price.

In the episode “Desperate Souls,” Rumpelstiltskin’s backstory is revealed, and that backstory sheds considerable light on his actions throughout the show. Rumpel was originally powerless. He was weak, crippled, cowardly, and impoverished. He had been conscripted to fight in the Ogre Wars, but ran away. Other characters treat him with contempt. His wife couldn’t stand to live with a coward, and so left him. A soldier mocks his weakness and humiliates him when he tries to bargain for his son’s freedom (“What do I want? You have no money, no influence, no land, no title, no power. The truth is, all you really have is fealty… kiss my boot.”). Later in the episode, Rumpel gains immense magical power by killing The Dark One (becoming the new Dark One in the process), and exacts revenge on the soldier. He becomes a figure of terror, later killing a man for accidentally scratching his son.

Many of his further actions involve an insatiable drive to increase his power, and prevent its loss. He kills Cinderella’s fairy godmother in order to steal her wand. He manipulates the relationship between Snow White and Prince Charming in order to produce the ultimate in magic: true love in a bottle. When his son tells him that everyone is afraid of him, Rumpel insists that he needs “more power” to protect what is his, and when the Blue Fairy shows him a way to abandon his power and keep his son’s love, he is so afraid of losing it that he lets his son be dragged into an alternate world, apparently losing him forever. When Belle falls in love with him, and her kiss begins to make him human again, he believes it to be a plot by the queen to “make me weak,” and flies into a rage. In the final episode of the first season, Rumpel manages to open a magic portal, and it appears that he is trying to retrieve his son, but instead he releases magic into Storybrooke. Rumpel’s long-term strategy remains unclear, but it is certain that somehow it will involve bringing him even more power.

When discussing the psychology of power and weakness, nobody does it better than Alfred Adler. Adlerian psychology (also called Individual Psychology) holds that the underlying force that motivates our behavior is a striving to compensate for helplessness and inferiority. We are all born weak and powerless, surrounded by giants and subject to their whims. Over time, if we handle these childhood feelings of inferiority in a healthy manner, our personality develops so that we strive for superiority in a way that benefits everyone (for example, if I strive to be an outstanding psychology professor, not only do I gain a sense of “mastery,” thus overcoming inferiority feelings, but my students also benefit from superior teaching, the college benefits from superior service, the field of psychology benefits from superior research, and so on). If these feelings of inferiority are not handled well, however, our personality becomes pathological.

We do not have any indicators of Rumpelstiltskin’s childhood. All we have to go on is our one look at his adult life. However, many of his actions fit Adler’s description of an inferiority complex. The core of the inferiority complex is an unshakeable sense of “smallness,” manifesting itself in behavior patterns such as timidity, indecision, shyness, cowardliness, and submissive obedience. An unresolved inferiority complex can produce a neurotic personality, obsessed with safeguarding self-esteem and personal security. In Adler’s words, “All neurotic symptoms are safeguards of persons who do not feel adequately equipped or prepared for the problems of life” (“The Structure of Neurosis,” 1932).
There are a number of pathological personalities that can be produced, but the one that best fits Rumpel is a destructive “Ruling-Dominant Type” (“The Fundamental Views of Individual Psychology,” 1935), characterized by an active and aggressive attempt to master their lives and the people in them. This type of personality undermines our ability to form what Adler called “social interest,” the sense of connection to and sympathy for one’s fellow humans. Rumpelstiltskin’s life of powerlessness left him with deep-seated anxiety, and he is so afraid of returning to a position of weakness that he would rather lose everything than accept anything less than utter supremacy.

How will this pathology play out in the second season? Now that magic has been introduced to the “real world” of Storybrooke, how will Rumpelstiltskin use it? How does this play into his ongoing contest with Regina? What is his real goal, and why was he willing to accept temporary disempowerment to achieve it? Will Belle stay with him, knowing that she could never be as important to him as his own power?

Next Time: Queen Regina and the Psychology of Evil

7 thoughts on “Once Upon a Shrink: The Psychology of Rumpelstiltskin”