In my first post in this series, I pointed to the ways that Mitt Romney’s campaign is like a Judd Apatow comedy. Just as equally as annoying as the Apatovian vision of the world is the work of J.J. Abrams. No matter what J.J. Abrams does, no matter how bad a movie might be or television show idea might be, J.J. Abrams always get the positive media press while others’ works go overlooked. J.J. Abrams can do no wrong. Likewise, the mainstream media’s relationship with President Obama, ever since the first days of the Democratic primaries in 2007. My experience with Abrams has been a little bit more ambiguous than with Apatow. I loved the first 2 seasons of Alias, after marathoning the first season of LOST I get nauseous at hearing that word, while I have yet to give Fringe a try, the Star Trek reboot was satisfactory but I will have to judge by the sequel what Abrams wants out of that series, and Revolution the pilot, was frankly mediocre and disappointing.

In honor of the Esquire article, 5 Things You can find in a J.J. Abrams show, I offer this comparison with Obama’s re-election bid!:

1. The Highly Attractive Woman Who has Combination of Guns, Secrets, and Challenges: On Alias, Sidney. For the President, it has to be a tie between FLOTUS Michelle Obama and Secretary of State Hillary Clinton

2. THE INTRIGUING FOREIGNER. On Alias, it was Anna Espinosa played by Whedony Player Gina Torres of Firefly/Serenity fame, and on LOST, Naveen Andrews. 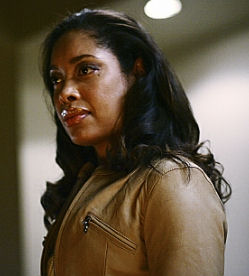 Although President was born in Hawaii, he played up to his racial otherness of being biracial, as someone leading the U.S. into the “post-racial” era which has proven to be a farce. Of course, it never helps when people start using your speeches to play up to the magical negro trope either.

3. THAT GUY CASTING: Abrams draws his male characters from random shows from the early 21st century (um, the year 2000), and so Ron Fifkind from L.A. Confidential could be found as an antagonist on ALIAS, and Matthew Fox from Party of Five, was on LOST. President Obama, the same way, has ret-conned people from the Clinton administration, most notably current Secretary of Defense Leon Panetta. Under Clinton he served as White House Chief of Staff. Larry Summers made a comeback as part of Obama’s economic advisory team.

Lastly, but not least:

4. The Central Mystery: For LOST, the big mystery was not really a mystery…since a lot of people figured the passengers had died in the plane crash. Were they or weren’t they in purgatory? For Alias, who was CIA? Who was DS-6? What was DS-6? Good? Criminal? Likewise, the Central Mystery for Obama will be two-fold: the enthusiasm Republicans have for Romney and Ryan’s Pineapple Express as well as the state of the economy, two things the President does not have any control over.