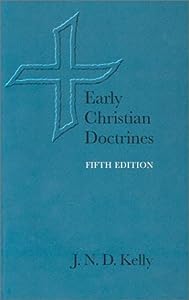 Last week I was doing some research on the theological resources of Tea Party politics, and I came across this quote from Dr. Gary North, a former research assistant for Congressman Ron Paul and now president of the Institute for Christian Economics.

“The ultimate boundary is the one separating God from man: the Creator/creature distinction. While man is made in God’s image (Gen. 1:26), he is not God, nor does he participate in God’s being. Man is commanded to be holy, for God is holy (Lev. 11:44-45; 19:2), but man is also warned not to seek divinity for himself (Gen. 11:6; Deut. 29:29; Job 38-41). Man is commanded to seek ethical unity with the perfect humanity of Jesus Christ, God incarnate, but man cannot attain ontological unity with God. A permanent boundary is placed between God’s being and man’s being. The unity between God and man is to be ethical, never ontological or metaphysical.”- Leviticus: An Economic Commentary

The Christology confessed in this passage is very telling. Later on, North goes on to advocate the Dominionist IMPOSSIBLE position of having both a theocratic and libertarian society. However, it affirms one of my Catholic acquaintances suspicions that the modern North American Reformed (and I would add evangelicalism) movement may contain elements Nestorianism, the ancient 5th century heresy that postulated the “2 Sons” theory, that Christ remained divided in his self, between his Humanity and Divinity. In fact, in J.N.D. Kelly’s work, Early Christian Doctrines, Nestorians found it offensive to say that God was born or that God died as the school of Alexandria had a habit of doing. In fact, when I discuss atonement with some evangelicals, they still say it was only Jesus’ humanity that died on the cross–Nestorianism Resurrected. I also see Nestorius’ creative title given to Mary as “Christokos” as an early form of constructive theology gone bad. Really, if one thinks about it, how can Christ, pre-baptism be called the “Annointed One”?

Kelly notes that Cyril’s virulent campaign against Nestorius happened because he believed the Nestorians were promoting only an ETHICAL unity with Christ (page 311). Cyril advanced the one nature, unity without confusion language of the hypostatic union, or what I would simply call Reconciliation. God and Humanity are reconciled, all together at-one (atonement) and still human and divine.

Back to the Tea Party. If one postulates that the first Tea Party happened December 2007 with the Ron Paul campaign, and Paul’s politics influenced in part by North, then the theo-politics of Nestorianism, which rejects the possibility of partake in God’s nature in at-one-ment is one would promotes de-centralization and disunity, especially in the area of the free market. This is why the TPM’s view of economics is lop-sidely on the side of the producers of society.

According to this “Alexandrian,” I would say I reject both the dualism of the pro-labor movements/socialists and the free market/pro-business corporatists. The politics of Hypostatic Unity is the one of Reconciliation, where the producers, the laborers, the volunteers, and unpaid workers of society work toward the common good.

Christ Jesus reconciles labor and production, “for there is no longer slave or free” (Galatians 3:8).

Leave a Reply to Rod of Alexandria Cancel reply