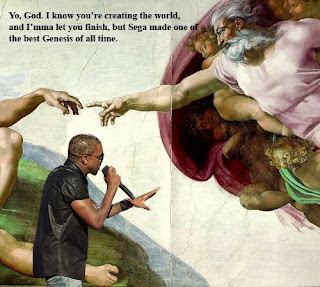 Growing up, our parents would reward us for making good grades in school by letting us play Nintendo (and later Sega Genesis) for a few hours on weekends. Videogames had grown immensely in popularity, and even became a gaming culture, with the Super Mario Brothers getting their very own cartoon and UGH!! live action movie. The rivalry between Nintendo and Sega was at its peek with this commercial, you remember, the one with the colorblind dog.

As someone who has always taken a stand against color-blindness, I sided with Sega! SEGA!!! SEGA GENESIS just had it all, there was Game Gear, Mortal Combat, NBA Jam, and Madden Football. Being a Sonic fan was part of my identity when I was in Junior High. I remember at one point in sixth grade, I was sooo obsessed with figuring out how to beat Sonic 2 and getting all the codes that I could. It’s just who I was. Is Sega coming back anytime soon? I wish it were, I really do. I’d be back into gaming and everything.

One of the advantages of being a Sonic the Hedgehog fan, I mean besides hearing Steve Urkel’s voice in the cartoon, was that Sonic was a great game to enjoy and it was safe and family friendly enough that my parents would approve of us playing it. We (my siblings and I) didn’t have to hide it from them. We didn’t have to ask for permission like we did with Mortal Combat or Double Dragon. So, from an early age, I was conditioned to play videos that had a nonviolent bent, or at least less violent if you count college and professional sports as violence. In college, I had fun playing Halo and Halo 2 with my friends online, but I was terrible. Why? Because I am a pacifist, and I just couldn’t get emotionally attached to the game. I would settle for moral victories, but that would be about it. It was my experience playing Halo Online on the interwebz with other college students as well as younger folks that I realized that we end up creating identities in the gaming world. In Halo 2, we were able to create new names for the Master Chief we played with along as choosing colors. It was just this little progress that enabled gamers to foster an online identity; a nerd could choose to be anyone she wanted to be.

This re-naming and re-shaping of ourselves within digital communities can be a good thing. But there can also be real dangers. For examples, some anonymous persons use their digital identities to troll, harass, and cyberbully others. This is exactly what happens to women when they enter into the foray of the male-dominated world of game, for example, the events last year with Felicia Day and Anita Sarkesian. The limits of gaming tourism does not even end at gender: as Chauncey DeVega discussed earlier the problem of cyber-racism. Last year,I reviewed Jessica Langer’s Postcolonialism and Science Fiction, and she dedicated a whole chapter to analyzing World of Warcraft. Avatars are created to mimic what people perceive to be biologically determined traits in other races. On one level, Massively MultiPlay Online Role Playing Games (MMORPGs) can be seen as a form of minstrelsy used to perpetrate racial stereotypes if we are not careful; however, it can also be used to subvert the status quo, to see ourselves in the other.

In the midst of all of this discussion about what makes us human, religious thinkers are beginning to take the gamer community seriously. No, I am not talking about the folks that brought us God the Destroyer the videogame. What does it mean for gamers to find meaning while at play? Joel posted on the Unsettled Christianity facebook page a link to this forthcoming book: Of Games And God by Kevin Schut. I would be interesting in reading about Schut’s findings. For now, while I pray for the day that Sega makes a comeback (Hey if Animaniacs can comeback on t.v., anything is possible!), I will try to look for games that I can enjoy, that deal with problem solving, and that don’t violate my commitment to non-violence.

I leave you with these two videos, one a song about the Nintendo Wii U, and the other on nonviolent iPhone games: